The Hawaiian Islands have a rich culture full of history and events. One of the well-known state holidays in Hawaii is the celebration of King Kamehameha Ⅰ who united the Hawaiian Islands in 1810. The holiday is recognized on June 11th of every year and known as King Kamehameha Day. All state and county offices throughout Hawaii will be closed June 10, 2022, in observance of the holiday.

Kamehameha Ⅰ, also known as Kamehameha the Great was born in 1759 in Kohala, Hawaii and passed away in 1819. During his lifetime, he made great efforts and went through treacherous battles for control of the islands. With his success, he went on to take most of the surrounding territories as well. After his death, his throne was passed down to three dynasties for nearly a century, ending with Queen Lili‘uokalani in 1893. 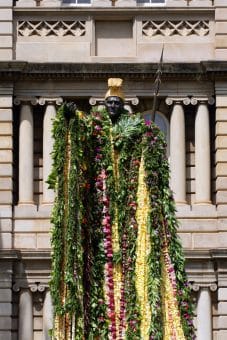 This year will mark the 105th anniversary of King Kamehameha Day. In honor of this proclaimed holiday, numerous celebrations across the islands will be held throughout the weekend where many will gather and commemorate Kamehameha the Great.

In Oahu, the community is looking forward to starting the ceremony Friday morning. Ali‘iolani Hale will hold the annual Lei-draping of the King Kamehameha Statue. Here, people will gather and watch the string of flowers made by volunteers and carried by city workers of Honolulu. The leis are carefully put over the outstretched arms of the King’s statue by an elevating truck.

The celebration continues into the following day. The Annual King Kamehameha Celebration Floral Parade takes place June 11, 2022, from 9AM beginning at King and Richards Street along ‘Iolani Palace. Participants will then head down Punchbowl Street, before making a right left on Ala Moana Boulevard and eventually Kalakaua Avenue. Many groups are represented and featured in the parade, from princesses dressed in 19th century gowns and colorful leis, to community band and fire department. The Celebration Floral Parade is a beautiful display of Hawaiian culture for all, with its eye-catching and vibrant displays, it’s truly a unique sight. The fun continues, at Kapiolani Park where the parade comes to an end and festivities begin with food, music, arts, craft, hula and much more from 11AM to 4PM.

King Kamehameha Day is a state holiday that holds importance and significance to Hawaii’s past. In order to honor Kamehameha the Great beyond June 11th, it is highly recommended to tour the ‘Iolani Palace to have a rich understanding of Hawaii’s monarchy. After the palace tour, you can walk across the street to Ali‘iolani Hale and visit the King Kamehameha Statue.

At the Royal Star Hawaii our experienced drivers provide in-depth narration on the history and culture of the islands during the Grand Circle Island and Pearl Harbor Deluxe Tours. During the 9-hour tour, we drive alone the historic downtown Honolulu with window views of ‘Iolani Palace and the King Kamehameha Statue and guests can take photos of these iconic landmarks. For groups who want a personalized tour, we also offer Private Group Tours, in which guests can experience and immerse themselves with Oahu’s rich history, scenic beauty and more!